There will be an article for each quarter of the year for implemented Bright Ideas.

The most recent month will be listed in the article first. Each article will be published no later than the month following the quarter in which the Bright Ideas were implemented.

I think it would be useful to have a history screen for REFU/I allowing users to see if and when interstate referrals have been terminated and reactivated. The data for this already exists in an OSIS database. The use for this information was found during my Lean Six Sigma group’s project.  The Bright Ideas Committee agreed that this was a needed project, as it is causing discrepancies on line 27 of the 157 report.

CBECS IT Resources have completed programming to create two new transactions in OSIS – the REFL, or intergovernmental referral listing screen, and REFH, or the referral history screen. 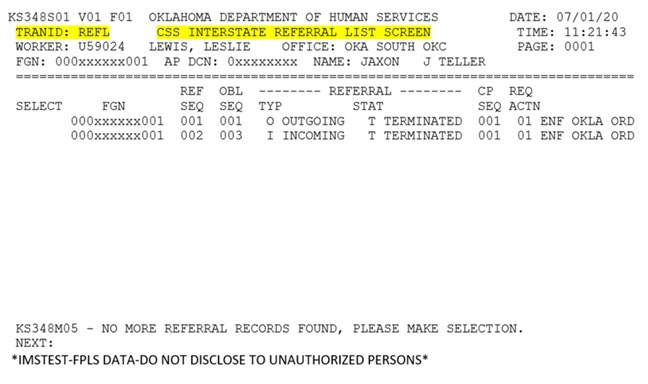 Previously, staff could only view the list of intergovernmental referrals on an FGN by viewing CSML, and then toggling back and forth between CSML and the various REFI sequences to locate the appropriate referral. This new transaction should ease this process.

Access this transaction by entering REFL <FGN>. Referrals are then listed in ascending order. 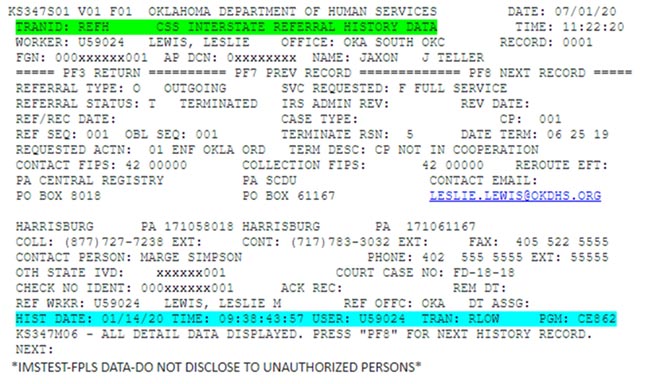 We would like to thank Jennifer Franklin, of the Center for Finance and Budget, for submitting the following Bright Idea that has been accepted, developed and now implemented.  This Bright Idea is in production as of August 4, 2020.

It would be very helpful if the CF25DTF and CF25DET transactions had PF7/PF8 keys to toggle from fiscal year to fiscal year. Instead of typing CF25DTF FGN CP# FFY every time you need to access a different fiscal year. Thanks.

CBECS IT resources modified the CF25DTF and CS25DET transactions to add PF7 and PF8 toggle keys.

The PF8 key will add one to the current fiscal year being processed.

Examples
Using 2020 has the current federal year, pressing PF7 will subtract one from 2020 giving 2019 has the federal fiscal year to use to look for fee activities for the FGN/CP.

Using 2020 has the current federal year, pressing PF8 will add one to 2020 giving 2021 has the federal fiscal year to use to use to look for fee activities for the FGN/CP. 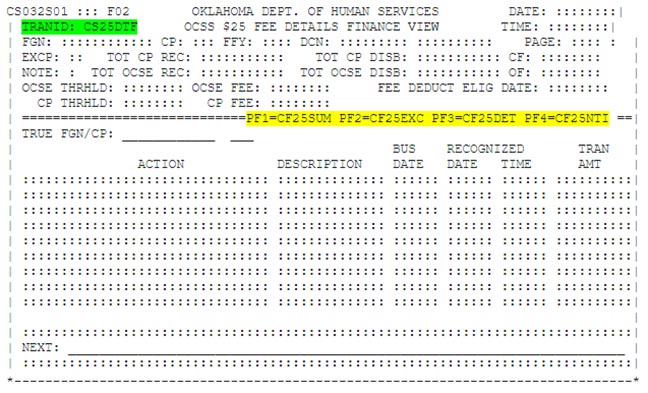 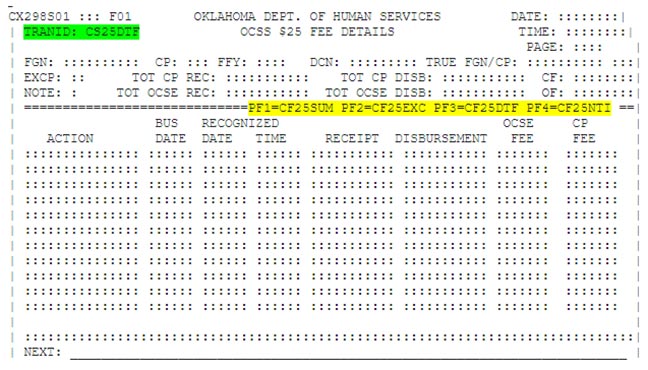 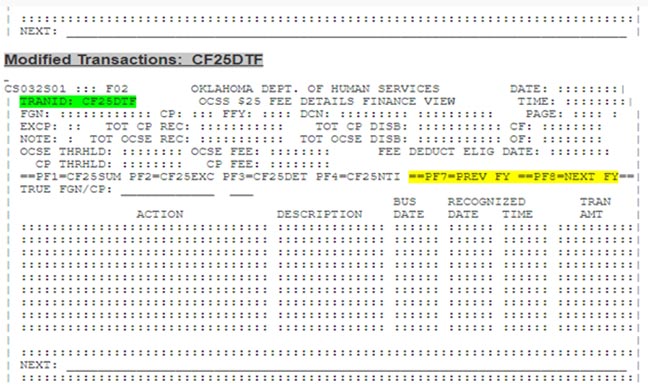 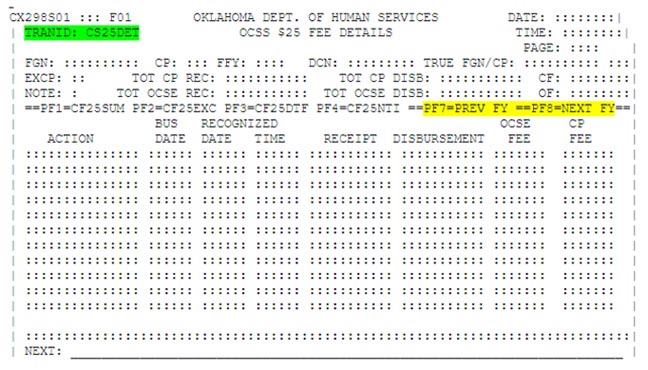 We would like to thank Chance Wimberly of the Durant Child Support Office, and Bettite Davenport of the Center for Operations, for submitting the following Bright Ideas that have been accepted, developed and now implemented.  These Bright Ideas are in production as of 8/11/2020.

I would like to suggest that a line for the certified mail tracking number/EZ Messenger job number be added to the DOCSL screen. It would eliminate the need to pull the case file from the hearing cabinet to check the delivery status. Staff could simply go to the DOCSL screen, retrieve the number then check the status on the USPS website.

During this conversation, I began to wonder whether it might be possible to add a field to the DOCSL screen that is something like “affidavit received?”  with a Y/N response character.  I don’t have the screen up in front of me but I think there’s some part to be completed after the hearing. Does that make sense?  As to getting people aware of the importance of completing it DOCSL in general, I’m going to talk to the enforcement PFR(s) and see if they can add something to help people understand that this is crucial to other issues.

CBECS IT Resources completed programming to add the requested fields to the Document Service (DOCSA/DOCSI/DOCSI/DOCSC) family of transactions.  These new fields on the Document Service screens will hold three separate pieces of information:  (a) the certified mail tracking number, (b) the EZ Messenger tracking number, and (c) Affidavit of Service returned, which is a Y/N indicator.  The third field was added as it has been reported that EZ Messenger has not consistently been providing CSS staff with Affidavits of Service when announcing that service was perfected against a case participant.  This field will be used to tracking purposes for the EZ Messenger Contract Monitor, Bettite Davenport. 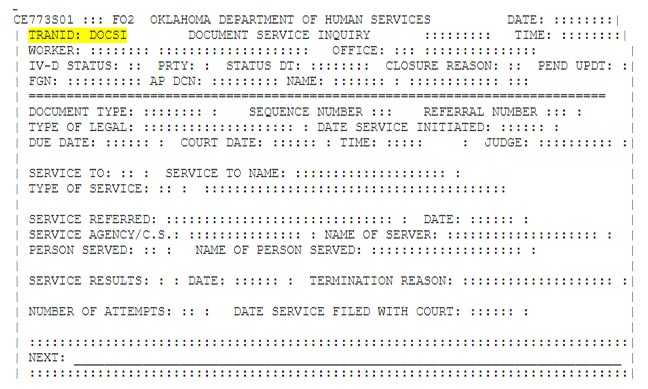 Modified Transaction:  DOCSI.  The new fields are highlighted below. 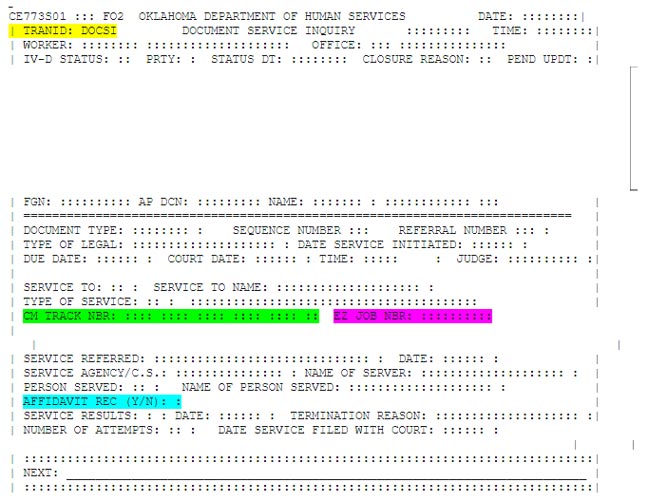