While these states have statutes directing their FIs to accept out-of-state-levies, not all FIs in these states will levy the account. For example, Berkshire Bank in Massachusetts will not accept CSS levies. There are 32 banks in Texas that will not accept CSS levies without a coversheet from the Texas Attorney General’s office directing them to do so.

The other 40 states and territories do not require their FIs to accept CSS levies at all. That does not mean you cannot send levies to those FIs. It just means they are not required to accept it. Fortunately, many FIs are willing to accept our bank levies. Non-Directly-Levy-State FIs that have made an agreement directly with the FIDM unit are added to the FIDMBNKI Oklahoma Support 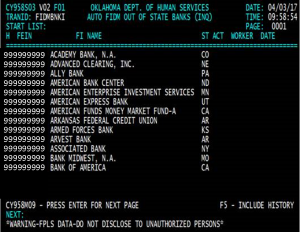 If you are about to attempt to levy an account in a state that is not a Direct Levy State, check this list to see if the FI is listed. If so, there should not be any problem. If the FI is not listed, you are still free to attempt the levy. The FI may not accept the levy. If they do accept the levy and they are not on the list, please let the Center for Coordinated Programs know so they can look into adding that FI.

What is the Interstate Data Exchange Consortium (IDEC)?